<2019>  <2018>  <2017>  <2015>  Home
2016 SAULT BLUES SOCIETY hosted events:​
DIANA BRAITHWAITE & CHRIS WHITELEY - Saturday Sept 24, 2016
What wonderful entertainers!  It was obvious to the large crowd at the Rock Star Bar that Diana and Chris love performing in front of a live audience. The dance floor was packed and was it 2 or 3 encores?! What a treat it was seeing Chris play the harmonica while holding it like a cigar, not to mention enjoying his performances throughout the night on the horn and guitar.  Diana's voice was smooth and strong and both were very comfortable telling the audience a humorous story or two.  Mark Gough, on drums, and Lindsay Pugh. on bass guitar, were at their usual talented best, being very skilled at playing with travelling or local musicians alike.
saultstar.com "Blues Veterans Know Genre's History"
saultonline.com "Chris Whitely and Diana Braithwaite Dive into the Blues"
​Click the poster below to find the slideshow "Play" button:
Diana Braithwaite and Chris Whiteley​ - Sat. Sept. 24, 2016
KENNY "BLUES BOSS" WAYNE - Sounds of Summer Bluesfest  Sat. June 18 2016
Multiple award winning international keyboard musician Kenny "Blues Boss" Wayne came in from out west and really tickled the ivories at the Canadian Motor Hotel. The opening acts included 2 fantastic bands made up of young people from the music programs at 2 local secondary schools - the "Pine Tones" from White Pines Collegiate & Vocational School and “Mustang Sally” from Korah. They put on great shows as did the house band “BLUESHOP” which consisted of local musicians Michael Yurich, Bob Yeomans, Lindsay Pugh and Mark Gough. Kenny arrived 2 days earlier and played several songs with MOJO at the Thursday Night Jam at Reggie's West to the delight of a very happy crowd. On Friday Kenny conducted a Masters Keyboard workshop, open to the public, at the Thomas Walls School of Music. At the Saturday Bluesfest itself Kenny put on an amazing show being an excellent musician as well as an all round great guy!! It was a pleasure watching him at the keyboard and listening to him sing and chat with the audience.
​Click the poster below to find the slideshow "Play" button:
KENNY "BLUES BOSS" WAYNE - Sounds of Summer Bluesfest -  Sat. June 18, 2016
SAULT BLUES SOCIETY SOO MILL BBQ - Saturday June 4, 2016
A fun time was had at the fundraiser BBQ sponsored by Soo Mill BuildAll in the parking lot of their Great Northern Road store. Sault Blues Society (SBS) executive flipped burgers & dogs under the "blue" tents.  The weather held up better than predicted as the rain was light at the beginning & then stopped completely. Live entertainment - an added treat - was provided by the SWAMP CATS who "blues-ed up" the parking lot in a way that only AL DAVIS and PETE COOPER could - with fine vocals, guitar and harmonica.  All proceeds go into the Sault Blues Society's operating fund to be used to continue bringing award-winning musicians to the Soo and to support local musicians.
​Click the poster below to find the slideshow "Play" button:
SAULT BLUES SOCIETY SOO MILL BBQ Sat. June 4, 2016
​MORGAN DAVIS - Friday May 13, 2016
Presented by the Sault Blues Society at The Waterfront Legend - Morgan filled the house to capacity and put on an absolutely awesome one man show.  He easily lived up to his Juno and Maple Blues Award winning reputation by entertaining the crowd with his vocals, light hearted storytelling, jokes and guitar playing mastery.  One of his guitars was his very unique 3 string cigar box guitar.  He also interlaced his performance with many not too well known Blues history tidbits while "playing homage" to great Blues pioneers.
SaultOnline.com “The Sault Blues Society Presents Morgan Davis”
Sootoday.com “Get Blue on Friday the 13th”
​Click the poster below to find the slideshow "Play" button:

TY ONE ON BENEFIT FOR TYRONE SOULIERE - Sat. Apr. 16, 2016
Local musicians gathered together by Rusty McCarthy at the Water Tower Pub showed their support for their friend and fellow musician, Tyrone Souliere by playing and singing their hearts out at this amazing fundraiser event.  The Pub was packed to capacity, the Water Tower Inn donated free prizes, blues fans generously donated cash and at the end of this amazing evening of entertainment and friendship a cheque was handed to Tyrone's family. The Sootoday.com story below sums up the spirit of the evening and what Tyrone meant to his friends and fans in the local music scene.  Sadly Ty passed away May 22, 2016.
Sootoday.com: "Local Musicians Ty one on (photos)"
Click the poster below to find the slideshow "Play" button:
TY ONE ON Benefit for Tyrone Souliere - Saturday April 16, 2016
8th ANNIVERSARY OF LIVE MUSIC at THE WATER TOWER PUB  Wed. Feb. 10, 2016 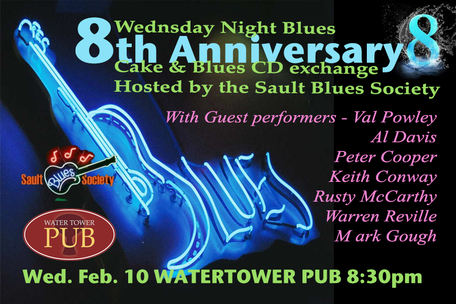